Since my previous post about BBC Basic I’ve been looking into the topic further, and it appears the language might have something going for it after all – it’s very similar to the pseudocode used by OCR, and OCR seems to be supporting it, as they have provided training materials using BBC Basic to illustrate solutions.

One problem the language does seem to have is a lack of materials available, so I decided to have a go at remedying that, and have produced a KS3 workbook, similar to my Python workbook, which provides guidance into the first few steps of programming – input, output, variables, IF statements and loops – using BBC Basic, including simple exercises. My intention is that the booklet provides enough information for the more able students to progress by themselves, while others will benefit from extra guidance from their teacher.

I myself missed out on BBC Basic, as by the time it was introduced in schools I was at the top end and about to leave, but I did start off with Sinclair Basic, which was very similar. I do miss the old days of line numbering, but I have to admit that these days it’s far easier! If there is a generation of teachers out there who need to learn how to teach computing in a hurry and they’re already familiar with – or even just have a passing acquaintance with – BBC Basic, then capitalising on that would seem to be a viable way forward.

I intend to look further still into BBC Basic and pseudocode, as students are expected to understand pseudocode anyway for OCR GCSE Computing, and being able to write programs in pseudocode that translate directly into executable code would be useful, but I do feel that there needs to be some sort of introduction to another language as well. Watch this space for more news on training materials.

I remember reading once (a long time ago, admittedly!) that universities don’t want students who have already learned a programming language because they get confused when learning a second, but on the other hand those who already have experience in two find it far easier to learn a third. I myself have found that it’s the thinking and planning skills that are vital – once you understand exactly what you are trying to do, finding the exact syntax in the language of your choice becomes the easy bit. It’s like learning to drive a car – when you first learn, you’re bothered by every small difference in another car – the side the indicator is on, the biting point of the clutch – but once you gain more experience you’re aware of the differences and can work better with the similarities. 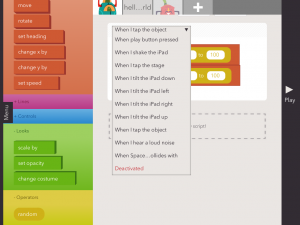 Hopscotch looks similar to Scratch in many ways

I’m always on the look-out for interesting ways to introduce children to programming, and recently I came across Hopscotch, a free iPad app.

At first glance, Hopscotch looks very much like Scratch, but it is much simpler, while making full use of the interface possibilities of an iPad.

Blocks available to use are limited to

Each script starts with an event trigger:

One sample program that came with the app produces this output, by using several sprites to each draw a section of the image:

My first reaction was that not having the full functionality of Scratch is a real disadvantage – there is no possibility of embedded maths, for example, because the only operator offered is one that generates a random number. 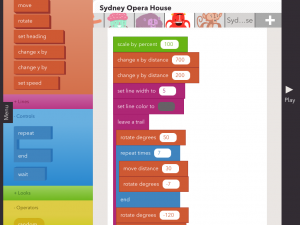 Part of the code for the Sydney Opera House program

However, on reflection, this could also be a strength, as limiting the code that can be used forces attention on those that can be used, so the coder can really explore the possibilities without getting too bogged down in complicated code blocks.

It’s my impression that the app is constantly under review and development, as since I first investigated it the collision function was added, so it’s very possible that within a few months Hopscotch turns out to be a fully developed, child-friendly graphical app design tool. 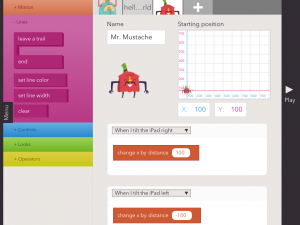 Tabs show different sprites in the program, while a simple diagram helps with placement on screen

In the meantime, it does offer basic functionality that enables creators to create interactive animations and activities involving basic logic. Its Event -> Action format would also serve as a good introduction to Gamemaker or other similar products, and of course the drag and drop graphics make it very easy for even young children.

I suspect that older children would find this rather limiting after a while, but I would certainly recommend it at key stage 2 for exploring possibilities in programming, and even as a cross-curricular maths tool, exploring distances and angles, for example giving a drawing to copy and seeing if children can describe the sequence needed to draw it.  Results could of course be recorded by screenshot and drawings to copy can be as simple or complex as needed, leading to natural differentiation by task.

There is a limited selection of cartoon-like graphics that can be added to projects, plus a text object. This limits what can be done rather, but again I suspect that this could well be developed in the near future, including hopefully the ability to import your own graphics. 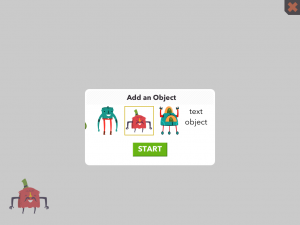 There is a limited selection of objects available, plus a text object

In summary, a basic tool that provides a good introduction to programming for younger children and has strong possibilities, but which at the moment is likely to be rapidly outgrown by anyone who has already experienced Scratch, as the interactivity offered by the iPad is negated by the limited instruction set.

If you have a class set of iPads, then this is would be useful. If you haven’t, then you’re not missing very much at the moment, but this could well be one to keep an eye on for the future.