One effective way to strengthen your own writing is to look at other people’s writing. Read the opening of a novel, or preferably several. How do they introduce the character? What idea do they give you of the character’s wants and needs? What promise do they make in the opening?

Now look at your writing. What do we learn about your character and the world they are in? Do we learn what they are missing in life? What lie are they telling themselves in order to feel happy? What do they think they need?

How does the setting relate to the content? Do we get a real sense of place, or could the events be happening anywhere?

How far does the story progress in the opening? Does anything actually happen, or is it all about introducing your world and the characters?

Years ago, a story might have started with a long preamble, setting the scene and mood. These days, the fashion is far more to start with action, and then cut back a little and fill in background once the reader is engaged.

Likewise, older stories might well use omniscient voice, but more modern stories tend towards close third point of view, so that the reader can really identify with your character and empathise with them.

Get into the habit of active reading – not just reading to enjoy the story, but to pull apart the storycraft and writing. What can you learn from any book that you can carry back to your own work? What pitfalls can you see and therefore avoid?

Stephen King, along with many other writers, is firm in saying that if you want to write, you also have to read a lot. So what can you learn as a writer who reads?

It’s also useful to make a note of books that use specific techniques – for example, The Martian is a great book to study. It makes use of first person via logs. It makes use of third person when it needs to. And, of course, it was a self-published book that then attracted a contract and a huge movie.

Beta reading can work too; sometimes it’s even more informative to see a less polished piece of work, and try to figure out what the issue is. But don’t assume that beta reading is enough. The wider you read, the better, and enjoy what you read. Just keep at least half an eye on the tricks the author uses, and think about whether you can adapt them for your own use. 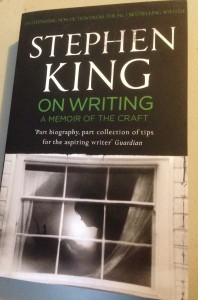