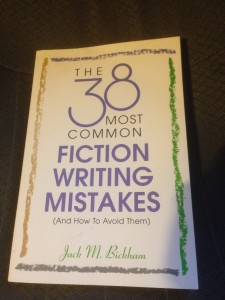 The 38 Most Common Fiction Writing Mistakes (and how to avoid them) by Jack M. Bickham is a slim but useful volume. It covers a wide variety of topics, each in a fair depth – most chapters are two or three pages long, explaining the nature of each mistake and how to avoid it.

Topics start with Don’t make excuses – suggestions to avoid the procrastination that all writers seem to suffer from to a greater or lesser degree. They continue with topics such as Don’t expect miracles, Don’t lecture your reader, Don’t ignore scene structure, Don’t ever stop observing and making notes, Don’t ignore professional advice, Don’t forget sense impressions, and finishes with Don’t just sit there.

The advice is sensible and thought-provoking, with probably more on general plotting and structure principles or the process itself than on specific writing issues. While this book is unlikely to directly influence your writing, it could help your attitudes and beliefs about your work.

The book is available in kindle or paperback, and the kindle version is available on kindle unlimited. There are more thorough books out there, but this does work as an interesting, relevant read as a present for a new writer, or as a general motivational book. Generally, though, there shouldn’t be anything in here that comes as a big surprise to any regular writer.

You can’t exist for long in the writing world without hearing at least a mention of NaNoWriMo – national novel writing month. During the month of November, the challenge is to complete a novel of 50,000 words. The writing should not start until 1st November, should be a new project, and the word count target should be reached on or before 30th November. Winners – those who upload and validate at least 50k words – receive all sorts of goodies from the sponsors, such as discounts on writing software or discounted membership of writing communities.

Some people swear by nano – some hate it. Some never open their projects again, some go on to publish. Some enter year after year and fail every time. Some enter every year and win, but do no other writing all year. Some win on their first year and then swear never ever to do it again.

One thing you must be aware of when taking nano on is that the writer who can storm through their novel draft in 30 days or less and then publish it within a week is a very rare creature. What’s much more likely is that you’ll be left with a draft zero, something that has got the story down in words but that needs a lot of refining, redrafting and a major dose of editing before it’s ready to be seen by anyone other than the writer.

So when you have finished nano, don’t rush to publish your work without considering the quality very carefully. On the other hand, don’t throw it into the bin in despair because it’s not ready to publish. That’s only to be expected. Never judge a novel by the first draft.

Please, if you’re going to take part in nanowrimo, enjoy the experience, make the most of the peer support and general buzz about writing, and then consider very carefully your next step. And before you try to submit to agents or publishers, please bear in mind that they have generally learned to dread the words “here is my nanowrimo novel” because of the pile of raw drafts they receive around December/January time! 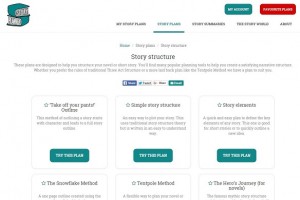 There are many different approaches to planning a novel. Do you start with characters and a setting and see what happens? Do you plan out every detail thoroughly before starting? How do you structure the content?

One tool that offers to help you with all that is www.storyplanner.com, a website where you can find a collection of different templates to complete online. There is a selection of plans to choose from, many well-known, such as the Snowflake method or the Three Act structure, as well as other, lesser known methods that are equally useful. Other sections on the website include facilities for developing your characters and your story world, and creating a summary or synopsis of your novel.

Plans can be created and then downloaded for further use, in Word, PDF or text format. A free membership allows you to create one story plan, which would need to be deleted in order to create a new one, while premium membership allows unlimited plans.

The variety of plans means that you are bound to find something that suits your method of working, and the advice that accompanies each plan will help you structure your thoughts and develop your ideas. Screenplay plans are included alongside those for novels and those applicable to either medium. The ability to favourite plans is an added bonus, as you start developing your planning skills. Links take you to further information on some of the plans.

I’m currently trying out this site for my own projects, and I’m finding it’s a useful way to keep my ideas together and organised. As it’s online, it also means that it’s accessible from just about anywhere. As a bonus, it also appears to be fully accessible from tablets, meaning that planning is easy to do while out and about, as long as you have internet access. 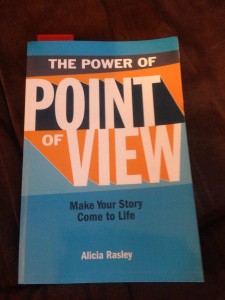 Point of view is one issue that many writers struggle with. One of the first questions you face is the question of which POV would suit your story best, and then there’s ensuring your POV is consistent throughout.

The Power of Point of View, by Alicia Rasley, looks at the topic in depth. Part one, the basics, looks at the different options and how they affect the story. Examples are given that demonstrate the difference POV can make both in the telling of the story and the emotional impact.

Part two, building your story, looks in more detail at each POV. The advantages and disadvantages of each technique are looked at in detail, so that you can make your choice wisely, and the technical aspects are looked at. As well as first and second person, third person is divided into impersonal, personal (single) and personal (multiple). The dangers of headhopping and how to avoid it are covered.

Each topic is explored in depth, with relevant examples explained, Further reading is suggested. There is enough technical information to be sure that you can tackle POV more confidently in your own projects.

If POV is a topic you struggle with, then you will find this book helpful. It might be a little much for a very new writer, but the content is accessible to most who have any experience on the topic and there is enough depth for more experienced writers too. The book is more expensive than the smaller guides but I’ve found there’s plenty of material in there to justify the cost, and the paperback is a useful addition to my bookshelf.

I often see complaints from authors that their beta readers are giving them conflicting feedback. “One wants more detail, another wants more action.” “One says this character is too bad, another says he’s too boring.”

So is it better to use just one beta reader? Or is there a way to reconcile different comments?

Using one beta reader means that you get one person’s opinion. This is useful, but limited. If the person likes thrillers more, then maybe they’re pushing for more action. Or maybe they prefer strong characters, or they’re focused on settings.

Using several beta readers will mean a wider variety of issues might be picked up, but it can also mean conflicting comments. Here it’s important to remember the golden rule: if they say something is wrong, then they’re probably right. If they tell you how to fix it, they’re probably wrong.

So in both the examples given above, the same issue is raised: in one case it’s the action/detail balance, and in the other it’s the characterisation. Maybe both sets of comments are right, because the passage gives off mixed messages. The fact they’ve selected this passage as not working right should be your cue to look closely at it, but you don’t have to agonise over their suggestions. Maybe the solution is something completely different.

What should the passage be achieving? Do you want the reader to feel the action? Then make sure your details are adding to the passage and not slowing it down. Do you want your reader to slow down and take a good look round? Then write the passage more clearly to show that.

The most important thing to do is to listen to your beta readers and think carefully about their comments. Then remember that it’s your novel and you have final editorial control. So thank your readers for their comments and input, and then edit your novel as you feel best. 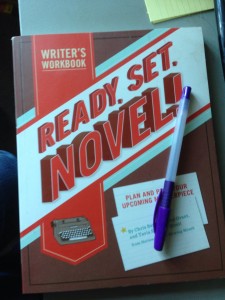 With Nanowrimo fast approaching, there are many writers out there preparing to spend the month of November writing a first draft of a novel. Ready, Set, Novel! is written by the organisers of Nanowrimo, Chris Baty, Lindsey Grant and Tavia Stewart-Streit, and promises to help you plan and plot your upcoming masterpiece.

While this book is more of a workbook than a reading book, the structure that it offers is very helpful if you’re new to planning for a full novel. From the very first steps of storming your brain, through characters and plot, to exploring setting and heading into the blank page, this book contains plenty of ideas and useful information to help you pass that tense month of October in a positive way and hit November ready to go.

Pages include family tree diagrams ready to fill in, places to freewrite about what you want to achieve, spaces for timelines, pages to consider the before and after of your main characters, suggestions for scenes, and a space to write out your schedule and deadlines.

If you’re used to planning for a novel and you already have a good idea of what to write, then this book would probably be too much for you, and you would struggle to fit your ideas into the areas and structure provided, but if you’re coming to nano for the first time, or are nervous about what to write or how to plan, then this book would be an ideal way to spend the time between now and November, when the fun really starts. And, of course, it can be used at any time of year, not just planning for National Novel Writing Month.